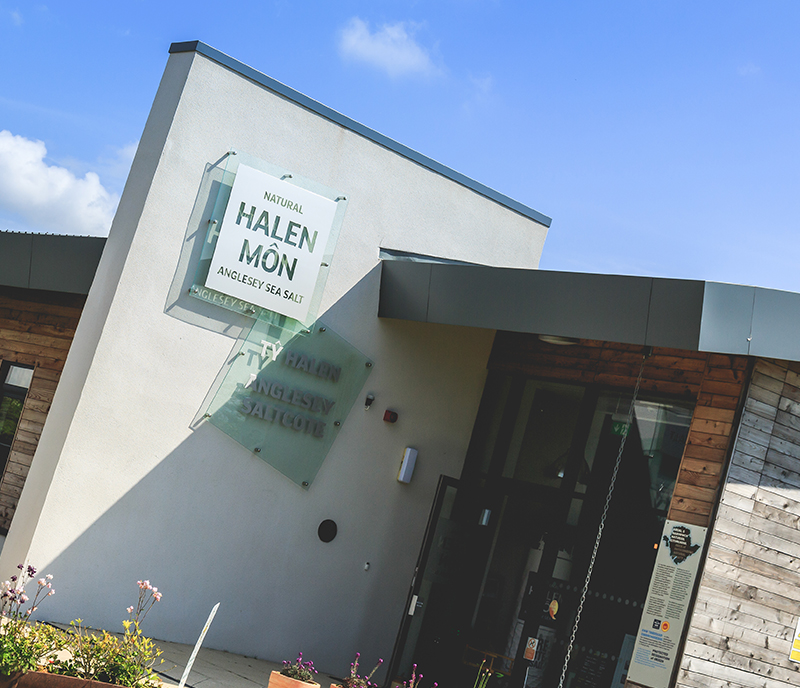 Award-winning builders Anwyl Construction completed the state of the art new production plant and visitor centre before the end of the year, ready for production early 2015.

The new Salt Cote – traditionally a coastal reservoir for the production of salt – will create at least five new jobs, taking the workforce from 17 to 22, and aims to attract 20,000 visitors a year.

Both are fans of the rare white crystalline sea salt which was this year the first Welsh food product to gain European Union Protected Designation of Origin and join the likes of Champagne and Parma ham in having its name in the EU’s food hall of fame.

It will replace the prefabricated former doctor’s surgery and food grade portacabins which have done duty as office and production facilities for the last seven years and from where the pristine white sea salt has been shipped to Japan, the United Arab Emirates and South Korea as well as the USA and Europe.

It’s graced the tables of El Bulli, the Catalan restaurant which was named best in the world, the Mandarin Oriental Hotel in Hong Kong, the Michelin-starred Tyddyn Llan, near Corwen, and the Smoked Sea Salt Caramel Milk Chocolates made by Fran Bigelow of Fran’s Chocolates in Seattle and the favourites of President Obama.

Anwyls are due to hand over the building on December 15 and after a fortnight shutdown to transfer the business, lock, stock and barrel, the intake pipe out in the Menai Straits will start pumping the sea water to the new salt cote – with the visitor facilities opening before Easter 2015.

Anwyl Construction Director Tom Anwyl said: “We’re very excited about the project and about playing a part in the continued success of this world famous product.

“It’s an interesting build because the steel-frame will have to be of very high quality steel and great care also has to be taken with all the building materials because salt has such corrosive properties.

“We’re pleased to have won the contract as a North Wales company and we do have a commitment to using locally-based sub contractors and supply chains and in this case just about everyone working on the build will be from North Wales.

“That’s important to us here and elsewhere because it helps guarantee a strong and skilled workforce with the capability to carry out projects like this.”

As well as a production facility the new building will also incorporate a visitor tour as a new venture, with the entire project overseen by local company Advent Project Management Ltd.

This will be a return to their roots for David and Alison Lea-Wilson as they also developed the successful tourist business Anglesey Sea Zoo over a 23 year period which they sold on to a former member of staff to focus on growing Halen Môn but which continues to thrive next door.

Anglesey Sea Zoo attracts 100,000 visitors a year and Halen Môn currently welcomes around 10,000 and David hopes this will double next year.

The new facilities will also guarantee they can maintain current production levels of half a million packs of sea salt a year with the capacity to increase that significantly.

The £1.15 million total cost to Halen Môn has been helped so far by grants totalling about 20 per cent, with £100,000 from the Welsh Government’s Wales Economic Growth Fund, a £95,000 capital grant from the Coastal Community Heritage Lottery fund and £25,000 from Anglesey’s Area of Outstanding Beauty Sustainability fund.

“We’re expanding because we’ve had to. We’re very busy and the old buildings have really reached the end of their useful life and we needed somewhere else to expand into.

“We’re really, really pleased to have Anwyl Construction, a North Wales firm, as the main contractor. We know we will get a quality building from them, using local skills and materials.

“We have been planning this major development since before 2008 and it is only possible now thanks to a huge co-ordinated effort by a large number of people and organisations who we want to thank – not forgetting our fantastic customers across Wales and the world who ensure that we provide a quality sustainable product.”

“We get so many people who call and want to see what we do so it makes sense to have a visitor centre here.

“This is the next stage in the growth of the business and it will add something totally new because next year when people ask us if they can have a look round we want to be able to say yes.

“We are exporting our range of products all over the world now and we need the extra capacity so as to be able to fulfil increases in demand and continue to diversify into new areas.

“The new European designation also means that people can’t copy our product – it means Halen Môn Anglesey Sea Salt has to be made here with sea water from the Menai Straits.

“We extract it from the middle of a rising tide because that’s when the salinity is highest and the only other ingredients are heat, about ten per cent of it supplied by solar panels, and the care and hard work of our artisan salt makers.”

The cladding for the building is heat-treated Welsh larch from a Mid Wales sawmill which David has personally selected with the help of Menter Môn  and their wood team and he added:

“It’s important to us that we use Welsh suppliers wherever possible and this order for over 500 square metres of cladding has safeguarded jobs at the sawmill.”