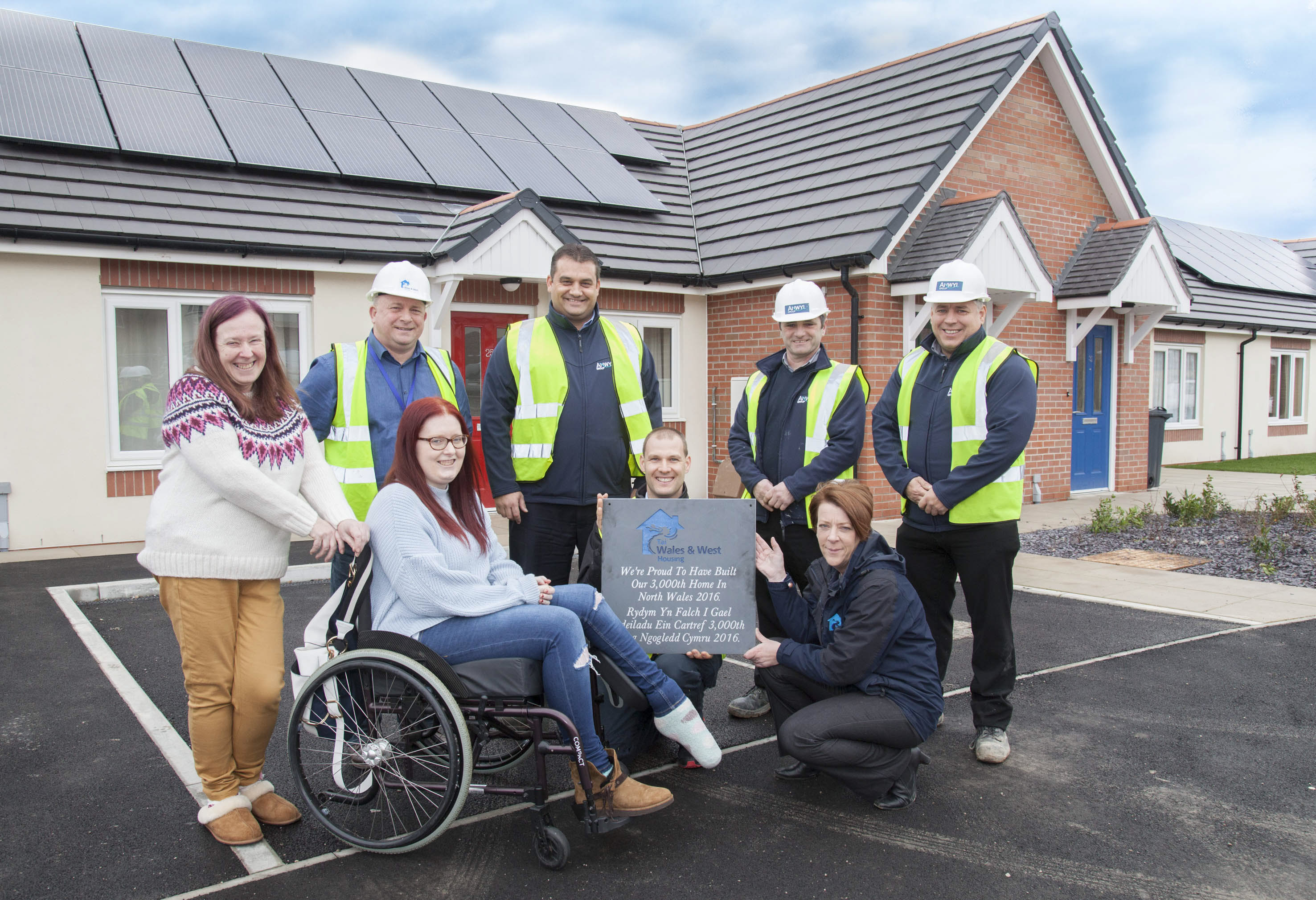 Over the last year, together with Welsh Government, local councils, funders and contracting partners, WWH has continued to help prevent homelessness, understand housing need and provide new much needed homes, now totalling 3000 in North Wales. Shayne Hembrow, Deputy Chief Executive and Commercial Director for WWH, said: “This is an important milestone as our ambition is for everyone to have a home that they can be proud of, in a place they want to live. Our plan for the next five years includes investing £250 million, delivering 1000 energy efficient new homes across Wales and investing in our existing properties. This will create more jobs and work opportunities and bring a substantial economic boost to local communities and businesses.”

In Flintshire, 914 homes have been developed and more are planned. Tir Glas comprises 44 houses and 14 apartments, consisting of energy efficient 1,2,3 and four bed-homes. And the residents are happy too: “I no longer feel like a caged animal in my new home” – Danielle Morgan, 23, has never looked back since she moved into her new home at Tir Glas. “I have a rare neurological condition called CRPS, which causes 24/7 pain and affects the immune system. I also have epilepsy, osteoporosis, dystonia and dropped foot. I had been studying at university when my condition was diagnosed but had to drop out as I couldn’t cope any more.“I was living in a flat in Shotton which was not suitable at all for me – it was too narrow for my wheelchair. I couldn’t get around and was reduced to living in one room – I felt like a caged animal.”

Her mother Sue, 57, is her main carer. Sue hated seeing her daughter live such a restricted life. “I saw the fight knocked out of her,” she said. WWH’s Housing Officer Ann-Marie Rastin met Danielle and offered a wheelchair-adapted home for her at Tir Glas, but knew that separating her from her mother would be difficult, especially as they relied on public transport. “How could I move Danielle so far away from her mum?” said Ann-Marie. “I had reservations so when an opportunity came for me to find a home for Sue, I took it and they now live next door but one from each other.” Danielle is more than happy – her bungalow has surfaces that can be raised or lowered to the right height so she can be independent in her own home, but also safe in the knowledge that her mum is not far away. Sue said: “It’s wonderful to see Danielle so much happier – she’s now getting her life back again.”

“Lifeline for jobs and apprenticeships” Anwyl Construction has built many affordable homes for Wales & West Housing in North Wales. Tom Anwyl, Director, said: “We have enjoyed a key partnership with WWH over a number of years which has been very important to us and to the construction industry in North Wales. “It came at the time of the worst recession in 70 years and has provided a lifeline in terms of jobs and apprenticeships as well as in developing skills and demonstrating that we had the capability here to carry out major projects. Together with WWH, we have insisted that the sub-contractors we used took on apprentices from the area and developed local supply chains because it is vital that major developments like this involve, invest in and benefit the local economy and community. We’re delighted to have completed their 3000th home in North Wales for them and look forward to building many more in the future.”

Find out more at www.wwha.co.uk