Anwyl Construction gets a ‘kick’ out of supporting local football club 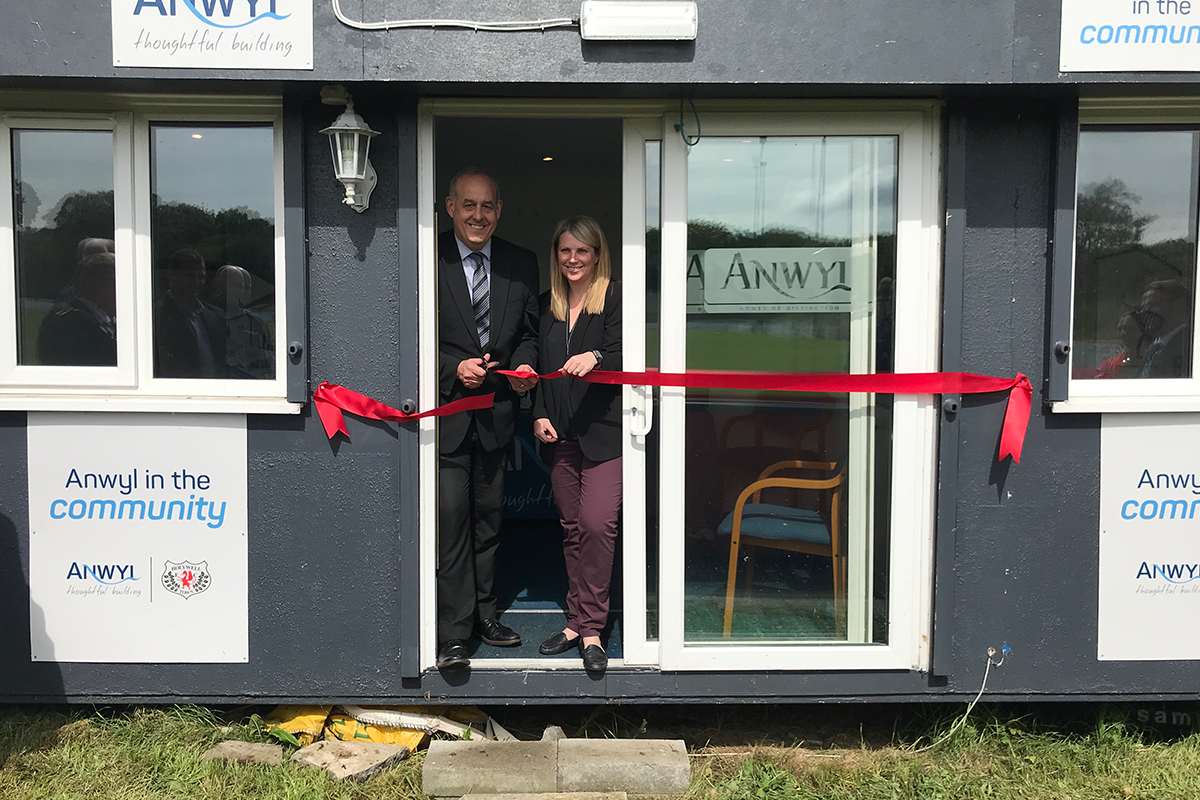 Holywell Football in the Community Officially Opens its doors to education & training with help from Anwyl Construction.

David Hanson, MP has been to officially open the new alternative education and training facilities at Holywell Town Football Club.

Anwyl Construction has partnered with Holywell Town FC and the National Lottery Community Fund Wales to help create a youth education and training empire for people living in Holywell and the wider Flintshire area.

Anwyl’s partnership with the club first emerged in 2016 when plans to build two major developments situated in Holywell, nearby to the club grounds for Welsh Housing Provider; Wales & West Housing, in partnership with Flintshire County Council started to take shape.

Anwyl donated, transported and installed two former sales office cabins at the club. Drainage improvement works to the pitch were also completed along with works to spectator walkways and stands, to help toward achieving the clubs Welsh FA’s tier system aspirations for their ground. Following the commencement of works to Plas Yr Ywen, a 55 apartment Extra Care scheme on the former Perth y Terfyn school site on Halkyn Road in Holywell, which is due to complete early 2020 – a third cabin surplus from the school site clearance was donated.

The installation of Broadband to the football ground site and assistance in connection throughout the ground was also facilitated by Anwyl.

The club successfully applied for a grant from the National Lottery Community Fund Wales which was used to purchase essential office and technological equipment as well as the installation of electricity within the cabins. The cabins now create revenue for the club, housing two local businesses Monday-Friday, and an alternative education training suite created by a team of staff and volunteers at Holywell Town FC.

The facilities which have been put in place have created many positive outcomes for the club and the local community alike, including: The creation of 5 new jobs for local people, the launch of an alternative education scheme for local children who struggle with maintaining regular school attendance, provision of youth training and qualifications, apprenticeship referral programme, a work ready volunteering programme via local Social Enterprise KIM4HIM, and the housing of a Men’s Shed and DIY club, supporting males with their mental health.

A young person currently studying at the alternative education facility has said:

Simon Rose, Senior Construction Manager at Anwyl Construction, and the driving force behind the partnership has commented:

We’re astonished at what the simple donation of some surplus units have done here in Holywell. It has unlocked access to training, apprenticeships and qualifications for young people who would other-wise struggle to obtain them. This training system and getting people into work goes hand-in-hand with our commitment to thoughtful building and our commitment of supporting the communities in which we work, we have been able to accept referrals from the clubs education programme to fill work experience opportunities and apprenticeship vacancies on the Extra Care site, which involves our supply chain too.

The opening event was hosted by Anwyl Construction and Holywell Town FC members, and welcomed local Flintshire County Council Councillors, including the Mayor of Holywell Town Council, along with Hannah Blythyn AM and David Hanson MP who had the pleasure of opening the ‘Anwyl Suite’ and training facilities.

I want to say thank you to Holywell Town Football club, all the volunteers & funding partners. What you are doing here is helping people in the community to have the club at the centre of their lives, to help turn lives around by getting people involved in education, to help improve skills and doing it with the support of businesses and organisations from the local community. It’s just fantastic.

In addition to all of the wonderful educational outcomes, the improvements made to the pitch has allowed increased training provision and new teams to be formed; volunteers from Aura Leisure in Flintshire have engaged with over 1600 local girls, working with a number of these at training sessions each week, which has in turn formed 3 North Wales league girls football teams and other junior teams. Other areas of impact include UEFA coaching qualifications and some members of the girls’ teams are due to embark on level 1 coaching training.

Over several years supporting the club, Anwyl have made a massive contribution to enabling the club to develop the ground into a true community facility. It’s superb to see the facilities being put to such important educational use.