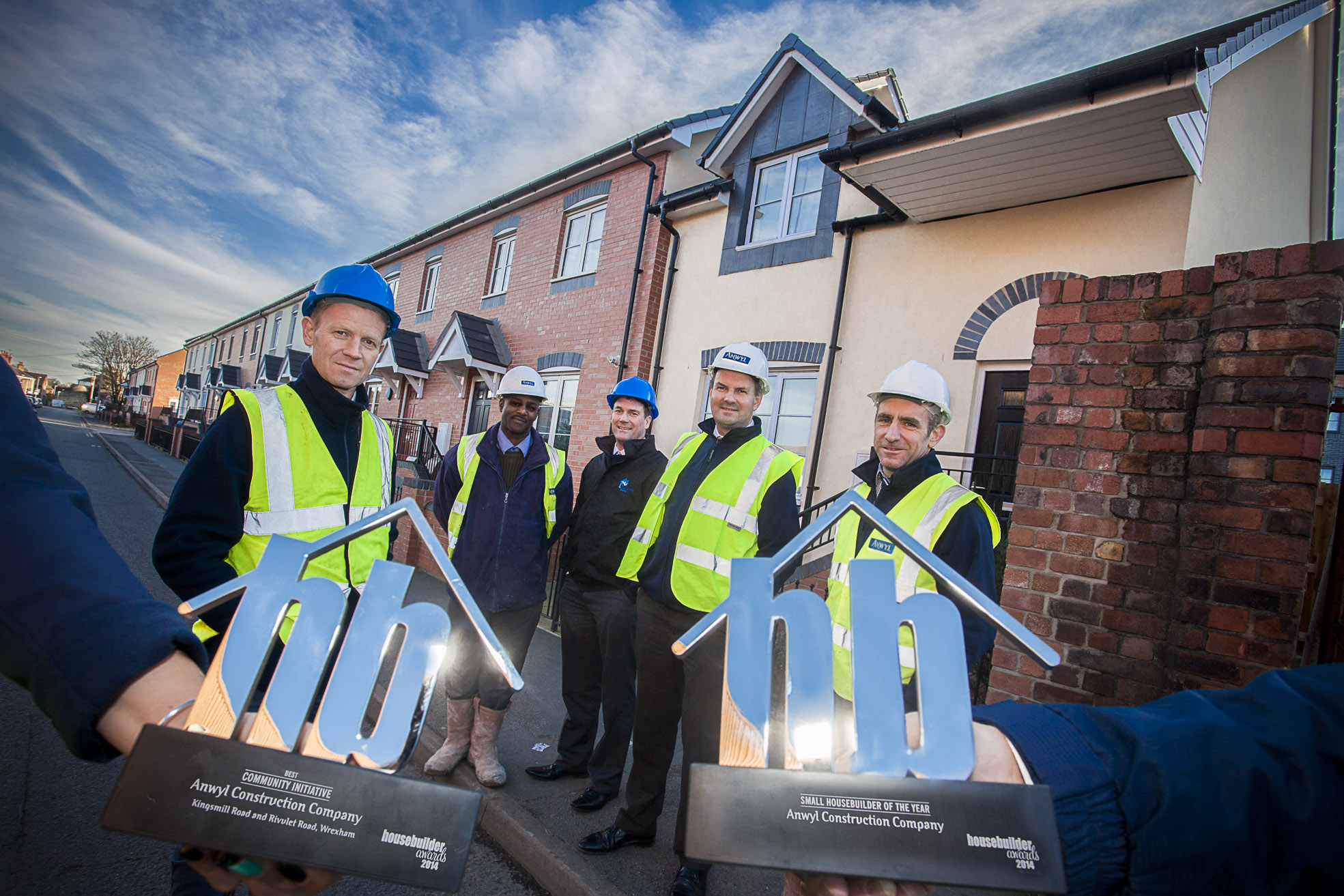 The Rhyl-based company is no stranger to winning awards and has previously been nominated for UK building awards, but this time the company took home two top prizes. They were short-listed by Housebuilder, the UK’s best read housebuilding publication, in the Best Community Initiative category of the awards for the £15 million 147-home scheme they are building in Wrexham for leading social housing organisation Wales & West Housing on two sites in the town – Kingsmills Road and Rivulet Road.

Anwyl was the only Wales-based company to make any of the shortlists where it joined a “who’s who” of the British house building industry, from Taylor Wimpey and Barratt to Redrow, while projects include the London Olympics Athletes’ Village and the Royal Arsenal Riverside regeneration.

When compere Stephen Mangan read out the results, Anwyl had not only scooped its category, but was also named the UK’s Best Builder in the Up to 500 Homes a Year sector.

Construction Manager Iain Murray, who has been in charge of the Wrexham project, was there to receive the awards and he said:

“It was a fantastic result because we were in a category with the likes of Miller Homes, Taylor Wimpey, Morston Assets and Dundas Estates. Talking to the big industry names there, they rate these awards very highly and really aspire to win them so for Anwyl to go there and compete with them and come out on top is a real feather in our cap.”

“Anwyl is the community king this year for recognising the positive economic impact a scheme can have on a local area. The development has spawned 16 apprenticeships, 18 work experience opportunities, 11 new employees and one new sub-contractor.”

The company was also praised for using Meet the Buyer events successfully so that 90 per cent of sub-contractors were from within four miles of the site and for involving local community groups and schools.

The judges’ verdict was:

“The community initiative category has become increasingly important in a world of the National Planning Policy Framework and localism. There was a nice range of entries showing different ways of engaging with the community with the five finalists displaying good initiatives. But the winner was Anwyl, a regional firm who demonstrated how the community could benefit hugely from investment with an initiative described as ‘hugely impressive’.”

The judges were also impressed that Anwyl had beaten off competition from much bigger firms to win the Community Initiative crown and that was the deciding factor in awarding them the Best Builder – Up to 500 Homes a Year award.

“We are delighted to have successfully flown the flag for the Welsh construction industry and to have shown that we can compete with the largest names in the industry. This shows that we have the skills and expertise here to take on major projects and carry them out to a high standard and in a way that is sensitive to the needs of the local community.

“As a North Wales-based company it is important to us that the local economy benefits from major projects like the Kingsmills and Rivulet sites and that they create the opportunities for local jobs and apprenticeships and are very proud of the fact that 20% of our own 150-strong workforce began their careers with us as apprentices.

“One of the criteria we used to select sub-contractors for this project was that they should share our commitment to providing a start in the construction industry to young people. We have worked hard with the local further education colleges and local organisations to help them make the most of the opportunities available.”

“We’re delighted to hear this news. Anwyl Construction deserves this as they have been very proactive in working with us to provide training apprenticeships on our Wrexham sites and tap into local supply chains and labour. They also worked closely with the local community, including schools, on a successful site safety campaign.”

Anwyl estimates that 70 per cent of the £15 million cost of the developments at Rivulet Road and Kingsmills Road will go on wages to an almost entirely North Wales-based workforce.

“It was always our intention to ensure that this major contract should bring benefits to the local area, and we’re delighted that this is happening. It was important to both Wales & West Housing and ourselves that this project would provide as many high quality training opportunities as possible, and also that it brings a real economic benefit to Wrexham and North East Wales.”

The twin developments for Wales & West Housing, working in partnership with Wrexham County Borough Council, are due to be completed early next year. Rivulet Road will see 35 houses and apartments built, as well as a five-storey block of 20 apartments, while a further 92 homes will be developed at Kingsmills Road. The project also includes a new community resource centre and medical facility.