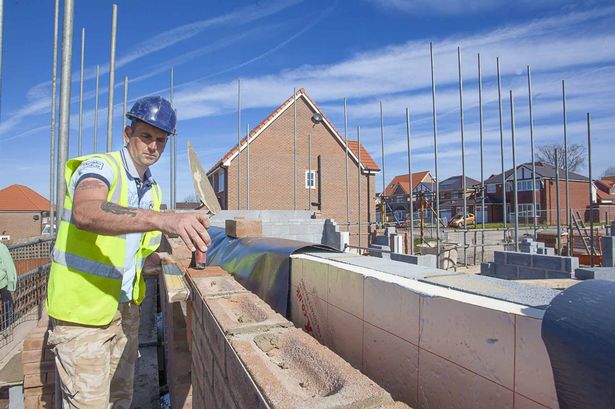 Developer Anwyl Construction will build over 400 new homes across North Wales and Cheshire over the next three years supporting and creating almost 2,000 jobs. That represents over £40 million of investment into the regional economy, according to figures from the construction industry.

Anwyl Homes, the house building arm of the Rhyl-based company, is one of the region’s largest builders of private homes with 150 built each year and industry figures estimate that each new house creates five jobs.

The company has received planning permission for over 250 plots this year with the acquisition of sites throughout North Wales and Cheshire. It said the expansion in building was being supported by the Help to Buy Cymru scheme which was now accounting for 30% of new purchases.

Anwyl is currently engaged in the 180-home first phase of the Croes Atti development at Oakenholt, near Flint, and planned starts include sites at Abergele, where they will build 95 houses, Northop Hall, 73, Buckley, 24, Port Dinorwic, 17 luxury apartments, and Hoole, Chester, 16.

The company recently held a successful Meet the Buyer event at Ewloe aimed at increasing the sub-contractor base in North East Wales and Cheshire, and those firms, representing a range of construction trades, from groundworks through to decorating, will be employed on the company’s house building and contracts projects.

With a locally-based workforce and supply chains, at least 80% of that £40 million will stay in the area, mainly in wages, and with every £1 spent three times that means a £100 million plus bonanza for the area.

“These are very important developments for us and for the area because of the jobs and work they will provide for a number of years and also provide much-needed housing. The construction industry is vital in leading us out of recession and it is important that for that recovery to be sustainable that there is housing to meet the requirements of the local population and local industry.

“We have been encouraged by the success of the Help to Buy scheme which was introduced in January and which has made a significant difference to the housing market in North Wales as it was already doing in England. The market for new homes in Wales had been depressed but it has been growing again and Help to Buy is accounting for over 30% of new purchases.

“As an industry we had been pressing the Welsh Government to follow England’s example in introducing Help to Buy and we’re delighted that they listened because it has given a shot in the arm to the construction sector. It is creating more jobs and more apprenticeships and that is vital to create a strong and skilled workforce.

“It has been a very positive step and a limit of £300,000 on the value of a home has been set at an appropriate level to assist first-time buyers in getting onto the property ladder.”