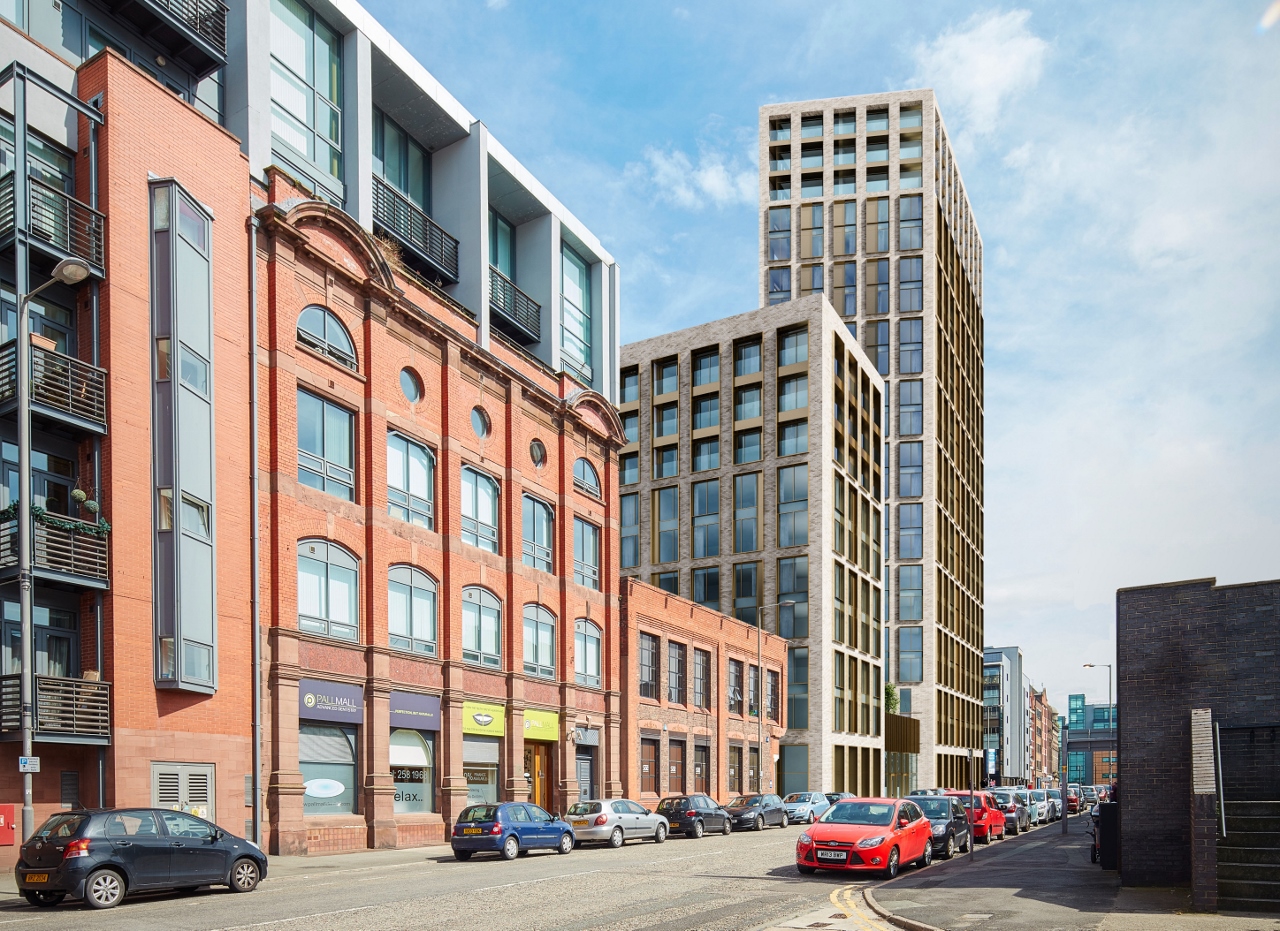 Developers Anwyl Construction have been given the green light for a £60 million eco-friendly apartment complex which they say will help transform Liverpool into a 21st century city.

The City Council today (Tuesday) approved plans for the luxury apartment complex on a derelict site on Pall Mall in the heart of Liverpool’s business district.

The complex will provide 336 luxury apartments and has been designed by award-winning Liverpool-based architects Falconer Chester Hall.

It is the second major project in the city for Anwyl who in October were given the go-ahead for a £45 million student accommodation development in Norton Street, Liverpool, on the site of the former National Express coach station.

Anwyl, a family firm whose headquarters are in Flintshire, in North Wales, hope to announce the name of the main contractor for the development soon.

Anwyl Construction Director Tom Anwyl said: “We are pleased to be a part of the redevelopment and regeneration that is taking place in Liverpool, a World Heritage site, as it transforms itself into a 21st century city.

“It is very exciting to be a part of that both at Pall Mall, in the heart of the business district, and at Norton Street and we have worked closely with our architects to ensure that the project complements the existing buildings there.

“The Anwyl Group has a reputation for high quality and thoughtful building and we are committed to ensuring that wherever possible we use local sub-contractors and source our materials through local supply chains and this is a policy we will continue in Liverpool.”

The recommendation by the City Council’s interim head of planning said the scheme would: “add visual interest without being overly dominant, and relate well to the City’s northern cluster of tall buildings, whilst engaging at a human scale.”

It added: “The active ground floor frontages and areas of landscaping which will be visible from the street will further add visual interest.

“It will respect the character and setting of the adjacent Castle Street Conservation Area and the Liverpool’s Maritime Mercantile City – World Heritage Site, in a contemporary yet sensitive way.

“He is also satisfied that the design is of a standard he would expect to find in this highly prominent and sensitive city centre location to ensure it contributes positively to the surrounding area whilst respecting the distinctive nature of the locality.”

The Pall Mall development will include a mix of studio flats and one, two and three-bedroom apartments with retail and office space on the ground floor and a private garden terrace on the first floor.

The eco-friendly scheme includes green roofs which will collect rainwater to be used inside the building, solar panels, and modern floor-to-ceiling windows to maximise light and cut energy bills.

There will also be a split-level car park, with space for 73 vehicles, and 132 secure cycle spaces.

Architects Falconer Chester Hall’s previous projects in the city include the Aloft hotel, the Beatles-themed Hard Days Night Hotel, both on North John Street, the Indigo Hotel on Castle Street and the Ibis on Dale Street.

The images of thee planned development show the tall tower coming to a sharp and dramatic point on the junction of Pall Mall and Cockspur Street West.

Anwyl have appointed leading city centre agent City Residential, who acquired the site on their behalf, as their residential advisor on the project.

Alan Bevan, Managing Director of City Residential said: “Pall Mall is a vibrant upcoming area and the Anwyl apartments scheme will complement other regeneration within Liverpool’s commercial district, and provide a much needed boost to the private rental sector in the area.”

The Anwyl Group is a family run company founded in Rhyl in 1930 and which last year moved into a new £2.5 million headquarters in Ewloe, in Flintshire.

As well as the Liverpool developments the company have announced a massive programme of new building projects across both their housing and contracts divisions.

Anwyl Homes have plans to build over 1000 houses over the next three years across North Wales and at sites in Sandbach, Willaston, Congleton, Newton le Willows, Audlem and Ellesmere Port in Cheshire, while the contracts division, Anwyl Construction, are engaged in a busy programme of over £40 million in contracts this year and the company recently launched a new development arm, Anwyl Land.