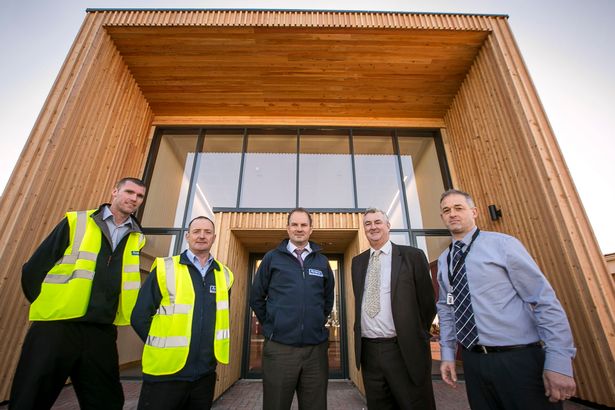 A brand new £2.1 million eco-friendly infant school is to open this autumn at one of the UK’s oldest and best known schools. Willow Lodge, the new facility for four to seven-year-olds, has been completed by award-winning builders Anwyl Construction in time for a September opening.

It has been unveiled to new parents and the school’s first intake of 80 pupils is already enrolled.

It is the latest in a series of projects which Anwyl Construction has carried out for the historic school, founded in 1541 by Henry VIII, which caters for almost 900 girls and boys and whose former pupils include Olympic gold medal oarsman Tom James and money saving expert Martin Lewis.

The new infant school boasts extensive green credentials and a very low carbon footprint. It is clad in Siberian larch and has a ‘live’ green sedum roof along with a rainwater-harvesting system for the toilets.

The new building, which has now been handed over by Anwyl, has six classrooms, some with covered outdoor teaching areas, three breakout rooms for small group work, a hall and dining area, activity room, a library, a staff workroom, and a medical room. It is surrounded by an extensive grassed and wooded games area and a playing area surfaced in rubber reclaimed from old tyres and with wooden seating and play equipment.

“It’s been a very good project and has run very well and we’re pleased with how it looks and with the feedback we’ve had with the client. The dry spell we’ve had meant that we had to hand-water the sedum roof after putting it in and before the automatic sprinkler system was installed. It has a series of sensors which ensure that the roof is watered at night, between 8pm and 5am, as and when required. If it’s raining then the sensors ensure that the sprinklers don’t come on.”

Margaret Ainsworth, the new Head of the infant school, said:

“We are taking 80 children in four classes of 20 each in September, two reception classes and one each for Years One and Two. The following year the numbers will be up to 120 and we have had a great uptake and the parents have been showing great interest in the progress of the development. They have been visiting the new school and they’ve been blown away by it. They liked the concept and now they’ve seen it they’ve just gone, ‘Wow’.

“I’m very pleased and thrilled with it. It’s certainly surpassed my expectations. I’m particularly impressed with the outdoor areas, including the playground. It’s important that the outdoor areas are as high quality as the interior and they are. Willow Lodge has been purpose-built specifically for teaching infant children and will offer the very best facilities to teach an exciting and forward-looking curriculum.”

Mrs. Ainsworth, formerly deputy head of the lower school at Queen’s School, Chester, joined King’s last year and has been heavily involved in the planning for the new school. The school will also employ four teachers and four teaching assistants with two more of each to join in time for the expansion in numbers next year.

“We’re very pleased to have again worked on an important project for such a prestigious client as The King’s School. The new school features the most modern building techniques and it is important for us to demonstrate that we have the skills, the experience and the high quality workforce in this area to carry out major projects like this.”

“This is the third major project Anwyl has completed for us. They built the sixth form centre and the learning centre extension to the junior school. They are very approachable and helpful and we’ve been very pleased with the work.”