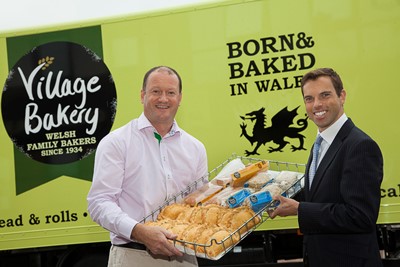 A new production line has created nearly 30 jobs at an award winning bakery. The Village Bakery invested £600,000 in the state-of-the-art equipment at its site in Minera, near Wrexham, in North Wales. The good jobs news was revealed during a visit by Clwyd South AM Ken Skates, who is also the Welsh Government’s Deputy Minister for Skills and Technology.

The bakery employs more than 300 people and has two other bakeries on Wrexham Industrial Estate where work has just started on building its new £3 million Baking Academy and Innovation Centre. The family run firm, which is celebrating its 80th anniversary this year, was last year crowned as Wales’s fastest growing company.

The new production line in Miner is being used to make pancakes and pikelets, a regional variation of the crumpet which was developed in Wales in the 17th century before spreading to the West Midlands, Chester, Lancashire and Yorkshire.

Unlike a crumpet, the pikelet is not put in a ring when cooked on a griddle. As a result, it is thinner than a crumpet and has a more freeform shape, giving the pikelets a spongy texture and distinctive pores which make perfect pockets for butter and jam.

In an independent consumer test with blind tasting by members of the public, the own-brand Village Bakery Pancakes rated better than Waitrose, Sainsbury’s, Tesco and Warburton’s golden syrup scotch pancakes.

“The Village Bakery is an incredible place. There is so much technology but at the same time they have a clear focus on craft skills which enables them to make craft products on a wide scale.

“There is a great working environment here and a superb and incredibly well skilled workforce. Skills are what make or break a company and the Village Bakery has invested very heavily in the skills of its employees and is reaping the rewards of that.

“I am particularly pleased the new production line in Minera, which was built with assistance from the Welsh Government, has created 26 new jobs. That is fantastic news for the local area. They have a long-standing local sourcing policy for quality ingredients and they have their own butchers here so they know exactly what’s going into the products.

“The Village Bakery brand is at the highest premium level and they are role models for the rest of industry in Wales. Other employers would do well to look at the success of the Village Bakery and replicate that.”

Managing Director Robin Jones was grateful Mr. Skates had taken time out of his busy schedule to visit the Village Bakery.

“We have done a tremendous amount of work in Minera over the past year and the sales of our own-brand products as a result of a major rebranding have been fantastic. We have a really good bunch of craft bakers here who are making really great products. Our partnership with the Welsh Government has been a big part of our success story. The new production line and hotplate here in Minera has enabled us to make a fantastic range of pancakes and pikelets.

“I much prefer a pikelet to a crumpet. They are made with 100 per cent Welsh buttermilk from South Caernarfon Creameries in Gwynedd and you can just taste the quality of the buttermilk. We had always expected they would do well and the production line is now running seven days a week. The sales have just sky rocketed – we’re making 400,000 pikelets a week and 300,000 pancakes a week.

“At the end of the day, we are still a craft bakery but we are developing products that are tasty and wholesome using technology that can give us the necessary scale. These are really exciting times for the Village Bakery and I am delighted the contract to build the new baking academy and innovation centre went to a local company, Anwyl Construction, who have a fantastic reputation. The baking academy will enable us to create the next generation of bakers and for all of this to happen during the year of our 80th anniversary is fantastic.”