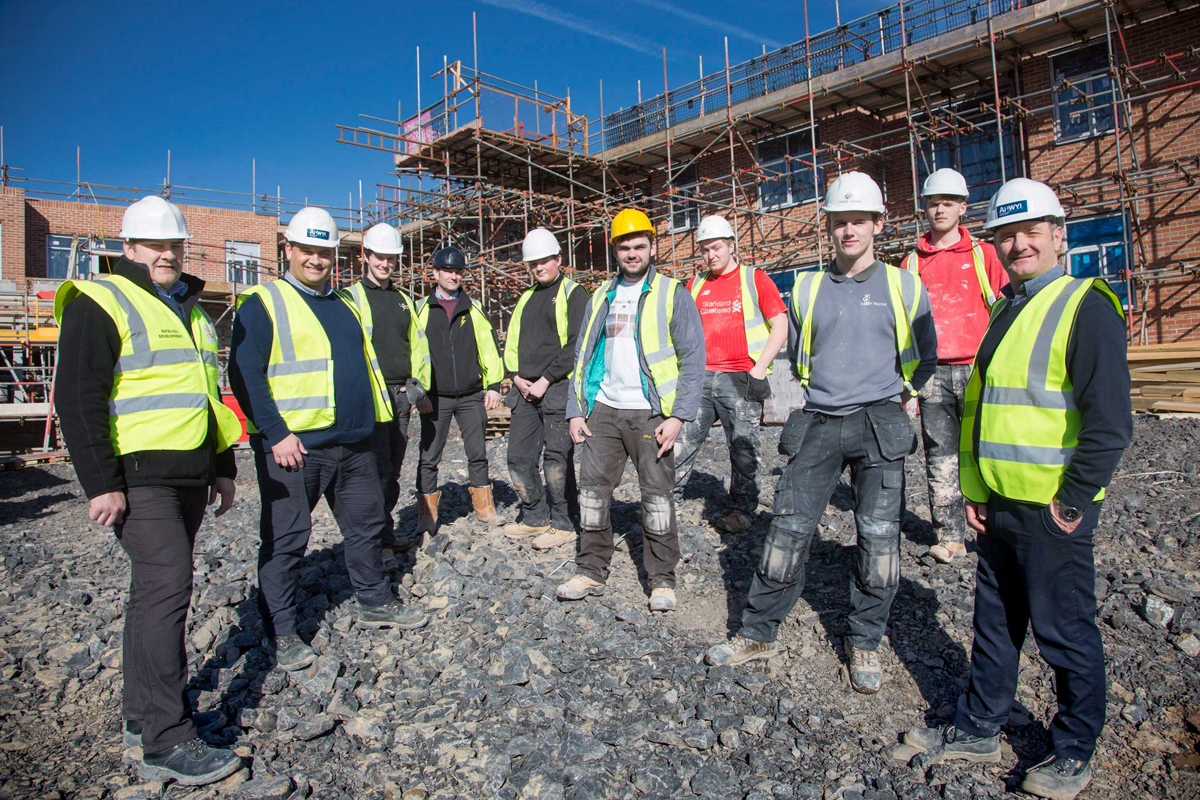 Our partnership with The Pennaf Housing Group has helped create over 20 apprenticeships across two state-of-the-art extra care housing schemes worth £17 million at Llangefni, on Anglesey, and Flint in Flintshire. Both projects are major boosts for local employment and supply chains and for apprenticeships to help plug the skills gap in the construction industry.

At Hafan Cefni, Llangefni, there are currently six apprentices learning their trades at the development, which will provide 63 independent living apartments as it nears its July completion date.

Simon Rose, Anwyl Construction Commercial Manager, said: “It’s very important to us that the communities where we operate benefit from the investment that goes into important developments like this. One of the enduring ways that can happen is by creating apprenticeships which give a career path to young people from the local area and at the same time help create a skilled workforce which is vital for companies like us. It means we can continue to compete for major contracts like this right across North and Mid Wales and the North West and we are very proud of the fact that 20 per cent of our current workforce of 182 began their careers with us as apprentices.”

Four of the apprentices on the Hafan Cefni site, from Anglesey and Bangor, are working with plastering contractors Ombler Williams of Llandudno, and two with A J Field Electrical and Mechanical from Sandycroft, in Flintshire.

“It’s great that we have so many apprentices here because it’s important that we can show the Welsh Government that we are providing local apprenticeships and using locally-sourced labour and supply chains.

As well as the direct job opportunities here all the concrete block has come from Mona Precast just down the road in Gaerwen and the timber joists from Huws Gray here in Llangefni.

It’s all about spending the Welsh pound in such a way as to benefit the economy here on Anglesey, in North West Wales and across North Wales and at Pennaf we are committed to working with partners like Anwyl Construction to create opportunities for apprenticeships and work experience.”

Thomas Pritchard, 18, from Llanfair PG, is a dry lining apprentice with Ombler Williams, said: “I was keen to work in construction and I applied to the company and was accepted and I’ve got an apprenticeship now. It’s the best thing I’ve ever done and I love it. I go to college on a block release to Norfolk and in the meantime, it’s been great to get an opportunity to work on a site close to home.”

Ollie Taylor, 17, from Gwernymynydd, Mold, is an apprentice electrician with A J Field and he said: “My dad is a stonemason so I have been around construction sites and I always wanted to do something hands-on rather than do A-levels. I e-mailed A J Field and was called in for an interview and I’ve been with them as an apprentice since September, going to Coleg Cambria on Mondays, and I love it.”

Anwyl Construction Site Manager at Llangefni Andy Adamson, from Rhyl, joined the company in 2009 as a 16-year-old apprentice and he said:

“We have had apprentices working here throughout the contract and covering virtually all the building trades. I began with Anwyl as an apprentice myself and they have always encouraged staff to take responsibility and do courses so there is a clear career path for someone young coming into the industry and the opportunity to develop a career.”