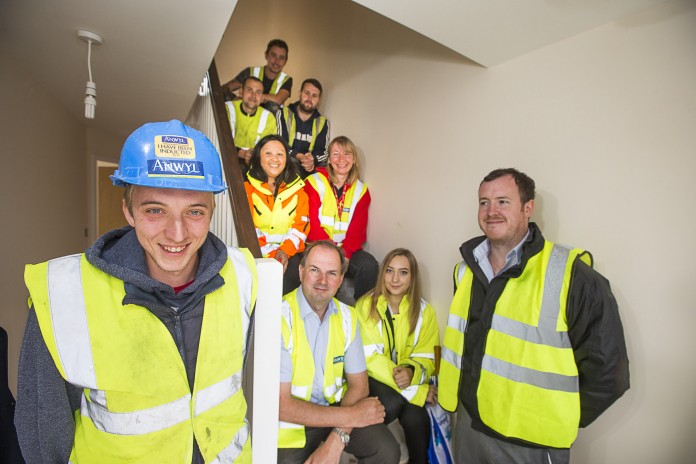 A Prince’s Trust training scheme to help give young people a foothold in the construction industry has secured jobs for six of them.

Among the successful candidates is young joiner Chris Rogers, 21, who has been working with Anwyl Construction on a £2.3 million affordable housing contract for the Wales & West housing association in Rhyl.

He is on the Get into Construction programme being run by the Prince’s Trust in partnership with Anwyl Construction and Wales & West Housing, who commissioned the development.

In North Wales almost one in six 16-25 year olds is struggling to find work but of the 11 young people aged between 18 and 25 who’ve received training through the Get Into construction course more than half are now in employment.

The homes are being built on the site of the former ITT factory on Cefndy Road for the Wales & West housing association. Anwyl Construction’s Parc Brickfield development comprises a total of 24 new affordable homes – 16 houses and eight flats – for clients of Wales & West Housing.

It has provided a jobs lifeline for Chris, from Denbigh, who studied joinery for three years at Rhyl College but was struggling to get on the first rung of the career ladder. Anwyl placed Chris with its on-site joinery subcontractors, Rob Valentine and Ian Gibbons, who were so impressed with him that they’ve now offered him a job.

As a result of the two-week course run by Shorecliffe Training for the Prince’s Trust, Chris and the others are now fully accredited to work on construction sites.

“I’m very pleased with my progress so far because it’s given me a foothold in the industry. Things are looking up for the construction industry so the future is looking bright.”

“It is very important that we encourage young people to take up careers in the construction industry and that we equip them with the right skills from the outset. It is appropriate that Chris has been given his chance working on a development that is also helping to build a brighter future for the people who will be moving in when the houses are ready in the autumn. The Parc Brickfield scheme is providing an answer to the need for affordable housing in Rhyl whilst boosting the local economy at the same time.”

It was a sentiment echoed by Wales & West development officer Penny Storr.

“There’s a desperate need for affordable homes in Rhyl so this is helping to meet that need. This was only made possible thanks to funding from the Welsh Government and our partnership with Denbighshire County Council. Affordable housing is more important now than ever and this project is helping to make a real difference. Importantly, this development is also giving the local community work and training opportunities.”

Philippa Davies, programme executive for the Prince’s Trust’s Get Into programmes, explained:

“We ran a construction programme with Shorecliffe Training in Denbigh and there’s been a huge involvement with a number of construction companies. The programme is aimed at young people from 18-25 who have a keen interest in construction but haven’t had the opportunity to get a job in the industry. While they’re on the programme they can gain work experience and still retain their benefits while they’re gaining that experience.

“We ran the programme for two weeks and out of the 11 people on the course, we got six of them into employment which is fantastic, and we’ve got one who’s gone back into education so he can go on to do civil engineering. We’re still supporting the others, and we’ll continue to do so for six months afterwards to help them into work. None of this would have been possible without the fantastic helped we’ve received from companies like Anwyl Construction, Jones Bros and Wynne Construction. They’ve been brilliant.”