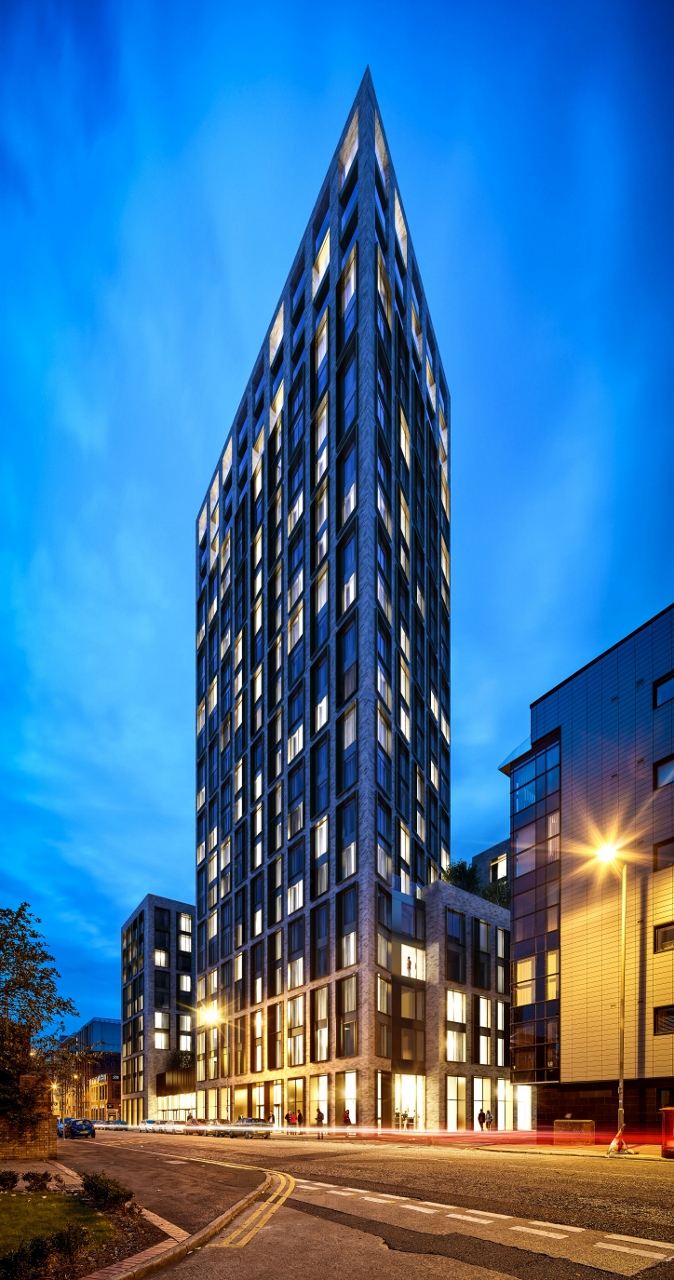 We have recently released images of our planned eco-friendly apartment complex development in the Liverpool city centre district of Pall Mall which will provide 336 luxury apartments and include a 21-storey tower.

We have submitted plans to Liverpool City Council for the complex which has been designed by award winning architects Falconer Chester Hall (FCH) whose previous projects in the city include the Aloft hotel, which last year won the National Award for Hotel Building of the Year, the Beatles-themed Hard Days Night Hotel, both on North John Street, the Indigo Hotel on Castle Street and the Ibis on Dale Street.

Construction Director Tom Anwyl said the development would provide 4-star hotel facilities for the residents of the spectacular new building.

He added: “This is the definition of modern city living. It will provide much needed high quality accommodation in the expanding Liverpool city centre commercial district, and support the redevelopment of the Pall Mall area.”

The image shows the tall tower part of the development coming to a sharp and dramatic point on the junction of Pall Mall and Cockspur Street West.

It will include a mix of studio flats and one, two and three-bedroom apartments with retail and office space on the ground floor and a private garden terrace on the first floor.

There would also be a split-level car park, with space for 73 vehicles, and 132 secure cycle spaces.

We have appointed leading city centre agent City Residential, who acquired the site on our behalf, as our residential advisor on the project.

Alan Bevan, Managing Director of City Residential said: “Pall Mall is a vibrant upcoming area including plans for a major new office development nearby at the former Exchange Station site.

“The Anwyl apartments scheme will complement other regeneration within Liverpool’s commercial district, and provide a much needed boost to the private rental sector in the area.”

Demolition work has already begun on the buildings that currently stand on the site.

Tom Anwyl said: “Liverpool is a thriving and exciting city and we’re proud to be playing a part in its transformation. We are committed to ensuring that the areas in which we work benefit from the investment in them by ensuring that wherever possible we use local sub-contractors and source our materials through local supply chains and this is a policy we will continue in Liverpool.”

As well as the Liverpool developments we have announced a massive programme of more than £80 million in new building projects across both their housing and contracts divisions during 2016.

Our construction division has a number of developments both in progress and due to start this year and we are scheduled to build over 300 houses this year and over a thousand over the next three years.