Young Mum Nails it as a Trainee Joiner 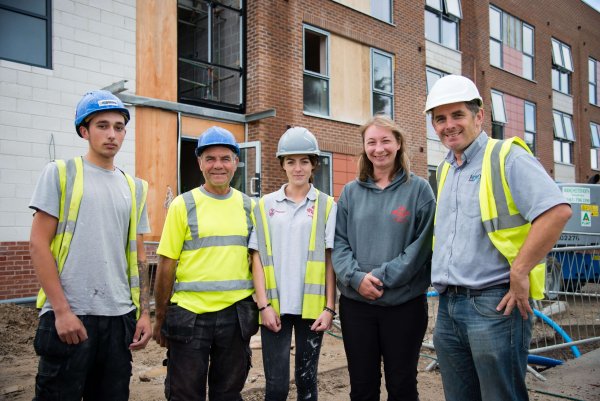 A young mum has been hailed as a role model as she embarks on a career in the construction industry.
Alleisha Carey’s dream of becoming a joinery specialist is coming true thanks to a partnership between award-winning builder Anwyl Construction and the charity close to Prince Charles heart, The Prince’s Trust.
The 24-year-old from Shotton, who has a three-year-old son, Harvey, is the first woman on a Prince’s Trust Get Into Construction Programme in North Wales.
She has been working on the Maes Helyg development on Deeside where Anwyl are building a new £2.4 million apartment building, encompassing 21 apartments for leading social housing provider Pennaf Housing Group, working in partnership with the Welsh Government and Flintshire County Council. The development is due to be completed early next year.
Anwyl stepped up to support the programme which has been hosted by the North Wales Construction Framework across Wrexham and Flintshire and placed Alleisha with Anwyl sub-contractor IGJ Joinery, from Wrexham, which has a history of supporting young people in training on the Princes Trust Programmes.

“I’ve always been a bit of a tomboy. My mum is a mechanic, my sister is a painter and decorator and my brother is a builder so maybe it’s not so strange to me.
“I was working in pubs but I had always been interested in building and I felt now was the time to try it so I went to the Job Centre and they put me in touch with the Prince’s Trust who arranged for me to come on the course.

“I’m really enjoying it. It’s something different and I thought it was such a man’s job but I can lift everything I need to and they’ve had me doing lots of things, using a nail gun and sawing and often it’s a matter of just knowing how to do something.
“I think some women could find it intimidating to work on a building site with lots of men, but everyone has been great and very supportive of my training and the Prince’s Trust have really helped me.”
Dave Bradley, Anwyl Construction Site Manager at Maes Helyg, said: “Alleisha has fitted in really well and has got stuck in alongside her colleagues and I think she has learned a lot and we’ve been extremely impressed and happy to have her on board.”

Alleisha will start a joinery course at Coleg Cambria in Connah’s Quay in September and is now seeking an apprenticeship with a local firm. She said:

“When I first got involved I thought I’d prefer being in a joinery workshop but I’ve really loved it on site and would like the chance to carry on especially if I can find someone to take me on.
“My little boy is thrilled about it too, he starts school in September and always says he wants to be a digger driver when he grows up!”

Philippa Davies, Programme Executive for the Prince’s Trust in North Wales, said: “We’ve been keen to get a young lady onto the programme and Alleisha is a special lady and it’s been brilliant because these programmes are a great opportunity for young people in North Wales.
“She has got on really, really well. She’s incredibly bubbly and enthusiastic and she’s got involved in learning all sorts of skills and now wants to go on and secure an apprenticeship and we’d very much like her to be an ambassador for other young women.
“Anwyl extended her stay on site for a further week and have previously supported a young man on a site in Rhyl who went on to secure permanent employment as a result. The Trust has worked very well with them while the programme has been very effective at getting people into construction careers.
“It’s brilliant that companies like Anwyl support us like this and it enables us to help young people so much so that in the last four months we’ve had 11 go into employment and we’re supporting the other five, including Alleisha, to continue in construction.”

“We’re delighted to be working with the Prince’s Trust again and to be helping more young people into careers in the building industry. Alleisha is showing the way for women in construction and hopefully her example will inspire more young women – and young men – into construction where there are so many roles and opportunities. We wish Alleisha the best of luck with her college course in September and with her future career in construction.”

Craig Sparrow, Corporate Director Commercial Services, for the Pennaf Housing Group said: “During the next five years Pennaf will be creating 731 homes for local people across the region, working closely with our local authority partners and it is excellent that our contractors, Anwyl, are working with the local community to provide such innovative training opportunities. We wish Alleisha every success in the future.”